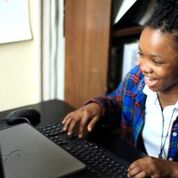 OCTO's DC-Net) Wireless team and the District of Columbia Public Schools (DCPS) have partneredr to ensure that DCPS students, teachers, and administrators have a fully connected learning environment. DC-Net's focus on school IT modernization—including ubiquitous wireless coverage and state-of-the-art telephony and unified communications delivered over a highly available, high capacity network—provides environment for students to get the most out of online learning opportunities.

Establishing ubiquitous Wi-Fi connectivity in all schools is a key component of the DC-Net and DCPS strategy, enabling:

The following 80 public schools (74.1 percent of all schools) are fully ready for PARCC testing. These schools have received full Wi-Fi upgrade between 2012 and end of calendar year 2015 and now have high capacity, ubiquitous Wi-Fi coverage throughout. They have the latest generation Cisco wireless access points and networking infrastructure.

The following 15 public schools (13.9 percent of all schools) will be fully ready to support PARCC testing via Wi-Fi in time for the scheduled March 2016 PARCC testing.