District Partners with US Ignite to Catalyze Next-Generation Internet Applications 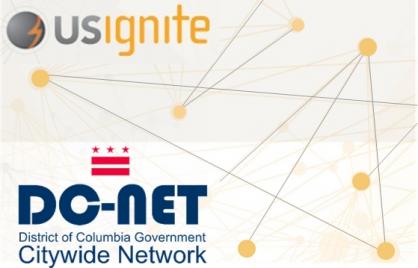 The District of Columbia has teamed with the US Ignite partnership, launched today in a ceremony at the White House, to capitalize on virtualized ultra-high-speed networks, and ignite the development of next-generation Internet applications and services for American businesses and families. In addition, the District is offering incentives to research institutions in the city to facilitate participation in the research and development network.

“The DC government is proud to partner with US Ignite on the vanguard of building our nation’s technological infrastructure,” said Mayor Vincent C. Gray. “By utilizing DC-Net, the District’s own ultra-high-speed network as a key part of this nationwide research and development effort, we have the opportunity to extend innovative broadband applications into our community to change lives as well as to foster development among high-tech researchers and entrepreneurs.”

The primary goal of the US Ignite partnership will be to catalyze approximately 60 advanced, next-generation applications over the next five years in six areas of national priority: education and workforce development, advanced manufacturing, health IT, transportation, public safety and clean energy. Responsibilities of the partnership will include assisting startups; local, state and federal government agencies; universities; industry leaders; foundations and community and carrier initiatives in conceptualizing and building powerful new applications. The resulting new applications should have a significant impact on the US economy, including providing a broad range of job and investment opportunities.

Through its partnership with US Ignite, the District’s network, DC-Net, will connect community anchors, government agencies, research and development institutions and other partners to the Global Environment for Network Innovation (GENI) network, enabling them to take advantage of, test and help develop Internet applications of tomorrow.

For universities and research institutions interested in participating in the initiative, the District will provide interconnection points to GENI. “This infrastructure can be leveraged by researchers who want to interconnect with GENI, giving them access to a nationwide test bed to develop and test applications at Internet-scale,” said District CTO, Rob Mancini.

The advanced technologies that will power the US Ignite initiative have been developed through the National Science Foundation’s GENI program and by US Ignite’s commercial partners. Flexibility is provided through the use of software-defined networking. Speed is provided by symmetric ultra-fast connections. And GENI Racks power the low-latency, programmable local cloud capabilities available to US Ignite applications. “The combination of these three factors changes the game for applications developers,” said US Ignite CTO Dr. Glenn Ricart.

The partnership has already entered into agreements that will bring its efforts to 25 cities across the country, including small, medium and large municipalities, including the District. Additionally, there are over 15 commercial partners who have agreed to be part of the US Ignite partnership.

Learn more about US Ignite.