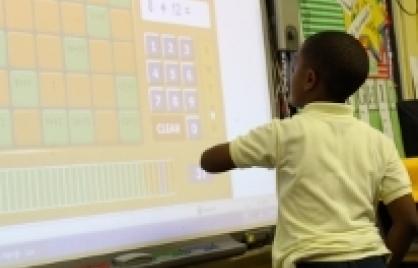 DC-Net has modernized the IT infrastructure at 21 public schools in time for the start of the 2012–13 school year, marking the third and most ambitious year DC-Net has played a significant role in the ongoing DCPS modernization and stabilization project.

For this renovation project, DC-Net redesigned, re-engineered and installed new voice, data, and ubiquitous Wi-Fi at each school site. Highlights include:

DC-Net completed Phase 1 IT infrastructure modernizations at 10 elementary schools, three new trailers (at Barnard, Lafayette and Deal), four reopenings/relocations (Moten, Turner, School within a School at the Logan Annex and Emery) as well as a full modernization at Anacostia High School. This work also included media/computer lab and library deployments at Hart, Johnson, and Kramer middle schools—dramatically enhanced the Wi-Fi coverage in labs to support additional computers and student usage.

Working in close partnership with the Department of General Services (DGS) and DCPS, DC-Net completed site engineering and design and produced bill of material requirements. DGS purchased equipment and made sure all data and voice cabling was in place. DC-Net then installed and tested the phones and other IT infrastructure at the school, and trained staff on the new equipment.

In addition to modernizing the IT infrastructure at the schools within two days following the end of the school year on June 14, DC-Net seamlessly set up temporary telecommunications and data services for administrative office personnel relocated from 11 DCPS sites to alternative locations—ensuring continuity of operations for the schools through the summer.

As in previous years, DC-Net relied upon its summer youth volunteers to help with school deployment. Students learned valuable telecom skills, such as conducting interior site surveys, installing and repairing phones, installing switches, connecting patch panels and switchboards and configuring and testing equipment. “Interns played a critical role in completing this project,” said Don Johnson, Director of DC-Net. “Through the training, mentoring relationships with DC-Net staff and real-world hands-on work experience, our students have contributed in ways benefiting both themselves and their communities.”